First, the Nano 2.0 has a similar design to the original Reebok Crossfit Nano Shoe. However, there are several core improvements as shown in the picture below.

Click on the picture above or here to check them out.

Basically,Reebok has spent the last year interviewing CrossFit athletes to improve the product and determine what features would make the best CrossFit shoe.

The short and fast of it are three key updated features

1) Enhanced stability. This comes in the heel section of the shoe, where stability is most important. In fact a good CrossFit shoe will have stability through the heel but flexibility in the toe (see point 2).

3) Increased breathability. The shoe is made from breathable mesh, which will ensure your feet aren’t squelching by the end of your WOD.

Check out this video here!  It talks about the process of designing the new nano.

Other key features are as follows:

Ok, so appearance isn’t the biggest thing on the mind of the serious CrossFitter, but I have to admit, these shoes do look great. Just by the way, I love the picture below. And guess what shoes they’re wearing ;-).

Basically, they come in a lot of great colours and styles  (see picture below). Check them out here. 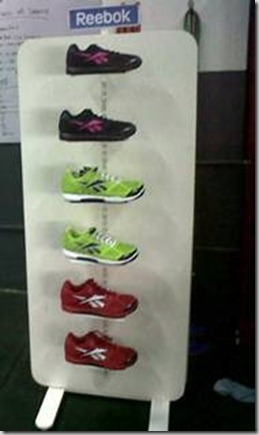 And  probably the coolest feature of all, the one that best differentiates it from competitor shoes is that you can customize it! Check out the diagram below for how it works. Only downsides are that it costs substantially more ($149 rather than $110) and also can take several weeks to ship.

Check out this awesome shoe that one customer designed.

So..what are you waiting for? Get more details about the Reebok CrossFit Nano 2.0’s here!